Christmas is upon us and it’s a little different here in The Netherlands.  There are Christmas decorations and lights though nothing to the magnitude of the displays in the US.  There are Santa decorations here and there but no Santa at the mall or on street corners ringing a bell.  The radio has all Christmas music stations just like in the US and we found a store that was like Christmas on crack with tons of snow village displays, trees, decorations and more.  There aren’t many Christmas parties or specifically Christmas themed events but there are ice rinks, special shows, and light displays.  And of course, tis the season for Christmas markets in Europe, so we had to check some out.

First, I went to a small Scandinavian market.  Not many exhibitors at this one, but there were some nice things and it was held inside the Norse church in Rotterdam which was very interesting.

Next, we ventured to Brugge, Belgium.  Here the Christmas market was outdoors and spread into several sections of the city.  They had some craft and artisan vendors but there were a lot of food vendors as well as an outdoor ice rink and several midway-style rides and games.  We bought a lace ornament for our Christmas tree and some candy coated peanuts and almonds.  And while everyone else had some hot chocolate, I had some gluhwein, a staple of the Christmas market. (for those wondering, it’s essentially a hot, spiced red wine).

Finally, we went to Monschau, Germany.  This market consisted of several areas of market stalls spread all over the city.  There were a lot of vendors selling artisan products as well as cheeses, candies, gingerbread confections, breads and of course a lot of food and drink vendors.  Some stalls were inside city buildings and many of the shops around the town were open as well including a three-story Christmas store.  We bought some cheese at this one and then we decided to get out of the cold and eat at one of the restaurants.  Monschau is well known for their mustard so I tried the schnitzel with mustard sauce.  It was a spicy brown style mustard which was good-even the kids liked it.  We also tried their famous dessert Monschauer dütchen which was essentially a hardened cake shaped like a cone with vanilla ice cream inside-no one was very excited about this one.  But our favorite part was trying some chestnuts roasted on an open fire, or rather, in a large kettle type drum used for cooking chestnuts.  We had never had them before and they were good in a strange sort of way.   Monschau definitely had some European charm with the half-timbered buildings which was enhanced by the snow on the ground and the twinkling Christmas lights and garland strung everywhere. 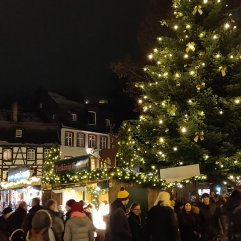 Overall though, I think that the Christmas markets may not live up to their “romantic European” hype.  Instead, they are sort of like the fair-you pay to park, pay to get in, pay if you want to buy anything and pay for food which ends up being the highlight of the adventure anyway.   But they are a nice excursion for a weekend in December if you don’t mind being a little cold.  We’re already scouting out a few that we want to check out next year as well as some other winter events.  So, for this year, I raise a glass of gluhwein and wish you all a Merry Christmas!