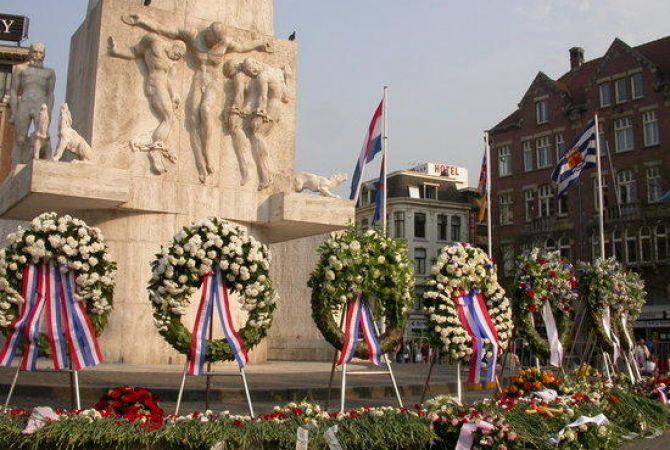 While WWII was an important war for many countries, including the USA, little is done to continue commemorating the war in those places.  That is not the case for many European countries, including The Netherlands.  I find their commemoration quite interesting and thought that perhaps some of you might as well.  So as Remembrance Day and Liberation Day are upon us, I am sharing a little about the events. 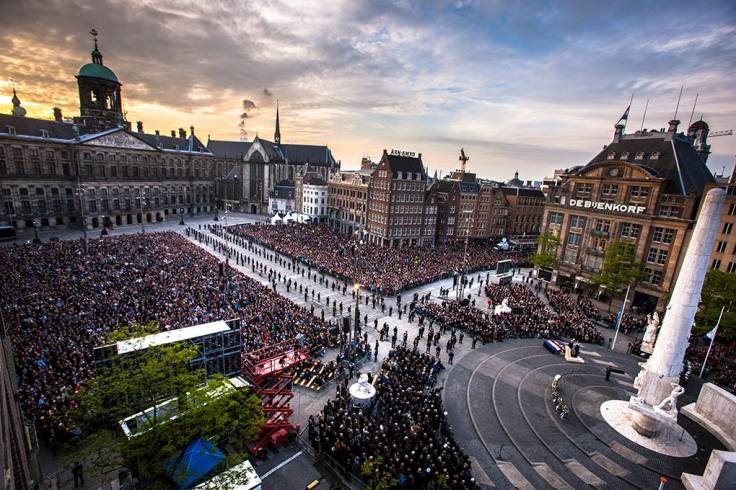 On Remembrance Day, a national ceremony is held in Dam Square in Amsterdam following a service in the church there.  The King and Queen and other dignitaries proceed from the church service to the square and lay wreaths at the foot of the national war memorial in the square.  Church bells ring for 15 minutes followed by two minutes of silence at 8:00pm which is observed by the entire country (traffic and public transport, flight takeoffs and activity in restaurants even come to a stop).  Following the moments of silence, more wreaths are laid for:

In addition, school children (one for each year of liberation in The Netherlands) and people from organizations representing the different groups affected by the war lay flowers.  All of this plus somber and poignant music, speeches, and performances are broadcast on national television.   It is very important to the Dutch that these people and events are not forgotten.

The end of the Remembrance Day ceremony marks the beginning of Liberation Day which is a bank holiday every five years.  On May 5th, The Netherlands commemorates the day the Nazi occupation ended in the country, and it is a day for celebration.  A Liberation flame is lit shortly before midnight on May 4th in Wageningen, where the historic documents of Nazi surrender were signed.  Torches are then taken by runners, cyclists, and inline skaters to other Libration fires all over the country.  During the day, there are military parades and music festivals and concerts around the country.  The Dutch flag is displayed at many homes and businesses and the Dutch are encouraged to think about their freedom and its importance. 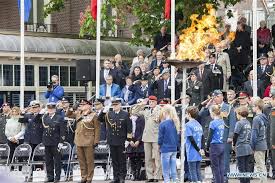 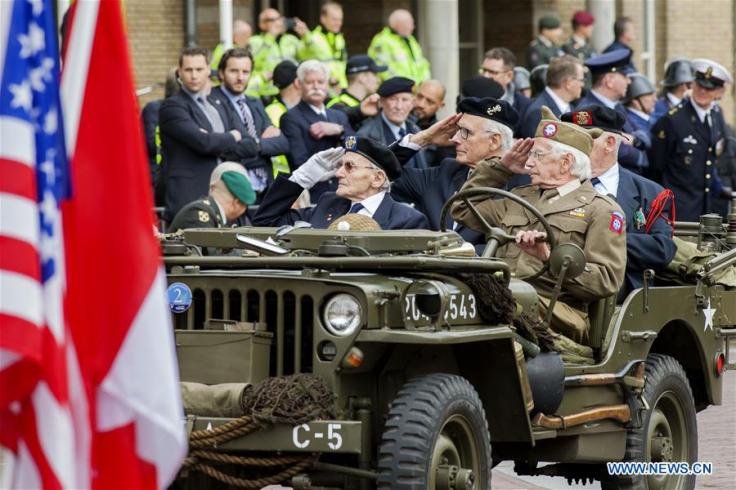 But don’t think that the Dutch have forgotten that they were not wholly responsible for their liberation.  The country has the utmost respect for the countries that assisted them in ending the Nazi occupation.  The nation was liberated by Canadian forces, British infantry divisions, the British I Corps, the 1st Polish Armoured Division, American, Belgian, Dutch, and Czechoslovak troops, and the flags of these nations and groups are flown on vehicles in the parades around the country.  In addition, throughout the year, in the town of Margraten, where one of the US WWII cemeteries is located, local citizens tend the graves.  Many American soldiers stopped in Margraten before crossing into Germany during the war, and they often stayed in the homes of Margraten families.  Their sacrifices have never been forgotten, and the amount of respect and gratitude felt for them is so great that the people of Margraten do more than just tend the graves.  Families adopt specific graves, take flowers and other mementos throughout the year, and, in some cases, are in communication with the surviving family members of those soldiers.  The adoptive families take it so seriously that they pass down the tending from generation to generation.  In addition, thousands of Margraten citizens fill the cemetery and place Dutch and American flags at the graves for a large Memorial Day celebration each year.

And while WWII involved many non-European nations, the war seems much less removed in Europe.  The evidence of the war can be seen more readily here, the effects are more apparent in everyday life and the memories and lessons of the war years and liberation are never far from Dutch minds.  These yearly commemorations are very important days for the Dutch and serve to remind us not only of the atrocities so that they are not repeated, but also of perseverance, gratitude, hope, joy, and the celebration of freedom.

One thought on “A Time for Remembrance, A Time for Celebration”