This past weekend we visited two locations that are very close to our home-Delfshaven and Delft.

Delfshaven is a historic district in Rotterdam.  There is a lovely canal area dotted with many historic boats.  Most of these boats are houseboats in which people live on a daily basis.  The area was very quiet even though just a block over was an incredibly busy street.  Some of the highlights of Delfhaven were an old windmill that has also served as a restaurant and the historic church which was the starting point of the pilgrims from The Netherlands that sailed on The Mayflower.  They began their journey in Delfshaven on a vessel called The Speedwell and sailed to England, joining The Mayflower to sail to America.  I honestly didn’t know that there were any Pilgrims from The Netherlands on The Mayflower, but my child informs me that everyone knows that! 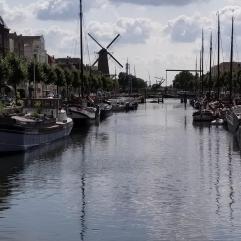 Next, we visited Delft.  This was a lovely town with a great main square.  In the main square, you could see a church with a huge tower and the old town hall.  Lining the other sides of the square were small restaurants and cafes as well as shops selling items from clothing and housewares to souvenirs (including some beautiful Delft blue china pieces).

Other areas around the square sported historic features such as old bridges and gates and this former single family home.

We really enjoyed these two areas.  Not a bad way to spend a Saturday and Sunday afternoon!