Now that we have looked at school life and work life, I think it’s time to look at pet life because being a pet in The Netherlands is a pretty sweet deal.  For the sake of this discussion, I’m going to stick to the two pets that we can see outside of the home-dogs and cats.  And the Dutch really love their dogs and cats!

Let’s start with dogs.  Many, many Dutch have dogs and since yards are not immense and sometimes don’t contain much green space, most of those dogs are indoor dogs (the exception might be in very rural areas).  But don’t worry that those dogs don’t get outdoor time because the Dutch take their dogs out regularly. 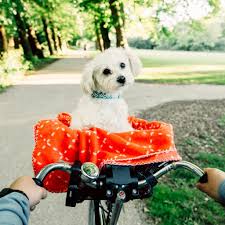 Many walk their dogs numerous times throughout the day no matter the weather.  And lest you think that walk means a quick stroll around the block on a leash, think again.  While leashes are used, many, many dogs are allowed to be off-leash.  Sometimes the dogs stay right next to their owner; however, they often wander in the green spaces along walking paths.  These dogs are so well trained, though, that as soon as the owner calls, they return to them.  But during their time in the green space, they are allowed to sniff around and explore freely.  There is really nothing funnier than seeing a small dog come out of a green space carrying a huge stick in its mouth as it moves on down the walking path.  Dogs are also often walked with other dogs and allowed to play with them in green spaces or dog designated areas.  For example, there is a sandy bank near a small lake in one of the parks near our home where numerous dogs are allowed to run around and play together.  In addition, dogs get to go everywhere.  They go to beaches, parks, restaurants, stores, etc.  Most restaurants have bowls for dogs that they bring out to the table just as they would bring cutlery. 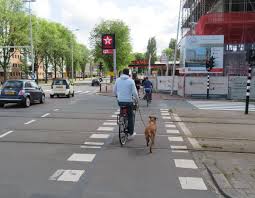 Now, what if a dog owner doesn’t have the time required to take their dog out many times a day?  Well, no worries-the dog daycare industry here is a big deal.  There are many dog daycare possibilities from larger organizations to individuals.  These organizations provide services from dog walking to dog day out to dog daycare and full boarding.  Usually, you can give the dog caretaker a key and they will come to your house and pick up your dog and return them later.  It is not uncommon to see a van with many dogs in it picking up and dropping off in residential areas.  Also, you can often see many dogs being walked together by these organizations.

While lots of well-behaved dogs out and about everywhere all day long is fun to watch, there is one downside-feces.  And one can find it everywhere.  While there are laws in many places that require that it be picked up by owners, the reality is that it often does not happen.  There is a joke here in The Netherlands that you shouldn’t walk on the grass anywhere because you never know when you might step in something that a dog has left behind.  But the truth is, it’s really not a joke but very much a reality.

And what about cats?  Well most of them stay in their houses overnight; however, during the day, they are often out and about.  But it would seem that for the most part, they keep to their radius that they frequently travel and don’t get into too much trouble.  In our small neighborhood, there are 5+ cats that are out every day, and I’ve never seen them fight or have any problems.  The downside, however, is probably the effect on birds/water fowl.  It is very common in the spring/summer when many duck, goose and swan babies are born to see the number of babies dwindle each day.  It may not all be due to cats, but I’m sure it plays a large role.  Also, while you might expect to find some cats dead in the road as they roam about, I don’t think I have seen this a single time. 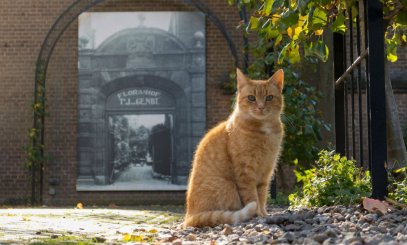 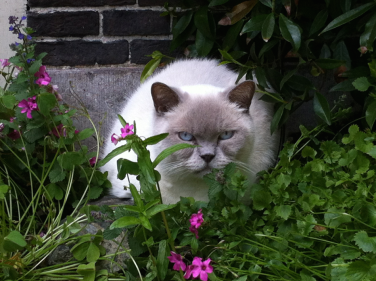 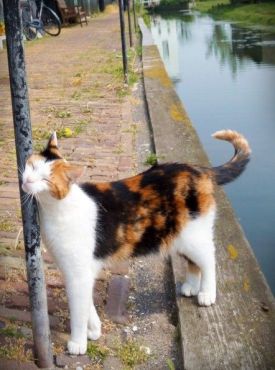 Now, you may be thinking that there must be a problem with stray animals since these dogs and cats are allowed the freedom to roam and spend time with others of their species.  But there really is no stray problem.  I don’t think I have ever seen a stray dog in the past 2.5 years and most of the cats that I have seen also appear to have owners.  In fact, The Netherlands does claim that they are the first country with no strays.  They have many laws to protect animals and punish abusers, they mandate that spaying and neutering services be offered for free and they encourage adopting versus buying animals-there is actually a tax on buying but not adopting.  Even finding animals to adopt can be a real challenge.  There are animal shelters in The Netherlands, but there are not many, there are not many animals kept in them regularly and most of the animals that are there come from stray and rescued populations in other European countries.  I have heard from many people that they often have to get on a waiting list to adopt when an animal becomes available.

A final item of interest to note-veterinary services are very reasonably priced and affordable here.  We probably paid twice to three times as much for routine vet visits and more specialized care in the US.  Food, accessories and boarding services are pretty comparable here to US prices.

Overall, the Dutch seem to have a culture in which pets are not only important members of a family, but are also given many freedoms in order to make sure that they stay healthy, receive plenty of stimulation and have a good quality of life.  They value these animals and believe they are entitled to care and kind treatment.  In other words, a Dutch pet’s life is a pretty sweet pet’s life.