As some of you may know, Rotterdam was hit very hard during WWII being extensively destroyed by bombing.  Like many of its neighboring countries, its Jewish residents were persecuted and resistance fighters worked around the Nazi regime to try to spare and improve the lives of Dutch citizens.  In the aftermath of Rotterdam’s destruction, a large majority of its population was encouraged to leave the country as there was nothing left here for residents and a process of rebuilding began.  While this destruction and rebirth is what gives Rotterdam its unique juxtaposition of old, traditional architecture with modern, original structures, the reasons for this rebirth have not been forgotten.  All over the city, one can find sculptures, art pieces, and memorials depicting the war, the unspeakable acts that citizens endured, and the heroes and fighting spirit that emerged. We recently spent an hour walking around the center of the city to view a few of these remembrances and reminders of the war. First up, was the former city hall building which features a lasting scar from the war; it is riddled with bullet holes.  The building is on a busy street that is a hub for shopping and dining in the area which makes it almost surreal to see the lasting reminder of such a dark and gruesome time that was not removed and distant but a reality of existence during that time.

Next, we walked nearby to the police station where a lasting memorial to a group of resistance fighters who were shot by the Nazis can be viewed.  These types of memorials were erected after the war using wooden crosses, but many later became permanent fixtures such as this one. 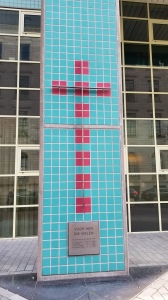 We made our way to a street that was about a 20-minute walk away, to see some “Stolpersteine” which translates to stumbling stones. These stones are set into the sidewalk in front of the former home of individuals who were exterminated or persecuted by the Nazis. This project was begun by a German artist in the 1990s. More than 70,000 stones can now be found throughout Europe and Russia and the artist oversees the installation of each one.  We found several up and down this particular street as well as on the surrounding streets. 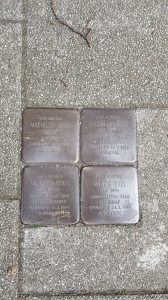 As we made our way back to our starting point, we found one of the markers delineating the line of fire that consumed the city after the bombing.  These markers outline the entire path of the wall of fire and feature the image of the “Destroyed City,” a sculpture depicting the city in the form of a man with his heart missing to symbolize the loss of the heart of the city due to the bombings, outlined in front of flames. 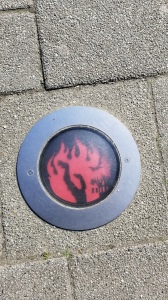 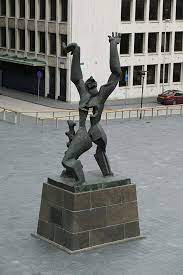 This map outlines the path of the wall of fire:

Our final stop of the day was Loods 24.  This site which is closer to the river was the location from which the Jewish citizens of Rotterdam were loaded onto trains to be sent to concentration camps.  Children as young as 3 months were shipped out.  The names and ages of the known children can be found engraved on this monument.

These markers, monuments, and scars throughout the city are evidence that the people of Rotterdam, rightfully, do not want to forget the past and the atrocities that occurred here, but as we took in the beauty of the day and our surroundings during our walk, we were also reminded that even amidst immense tragedy, we are capable of healing and building a future. **Remembrance day is May 4th in the Netherlands. I encourage you all to remember on this day and always so that we never repeat the past.