Yesterday, we spent the day in the capital of West Flanders-Bruges, Belgium.  Upon arriving in Bruges, the first thing we did was pass under one of the original city gates. 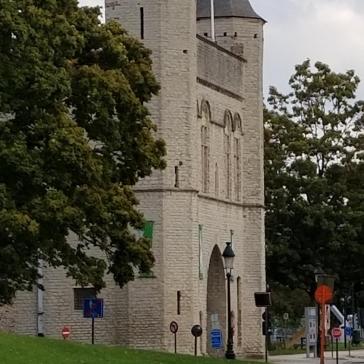 We drove through the streets, which all had a very “old world charm” to them on our way to the market square.

At the first city square, we saw some elaborate buildings.

In addition, we went into this church which is called The Basilica of the Holy Blood and was built in the 1100’s.

The reason it is called this is that inside they have a vial that contains a cloth that is supposedly stained with the blood of Jesus.  According to the history, the blood was wiped off of Jesus onto this cloth after the crucifixion by Joseph of Arimathea and sealed in the vial which was brought from the Holy Land by Thierry of Alsace, Count of Flanders in the 1200’s.  They allow people to view the vial, which we did.  The vial is watched over by the woman in the photo and laying on a table in front of her.  After looking at it, she hands each group a prayer card with a prayer in many different languages.  It was interesting, though I must say, the children thought the contents of the vial were a little gross looking.

We also grabbed some lunch in this first city square.  The adults decided to go traditional with a Flemish beef stew and Flemish rabbit (and some Belgium beer and fries of course!).  Both dishes were very good.

After lunch, we walked to the Markt square.  Interestingly they were having a small parade and concert to commemorate the troops that helped the city during WWII, particularly some Canadian forces which liberated the city. 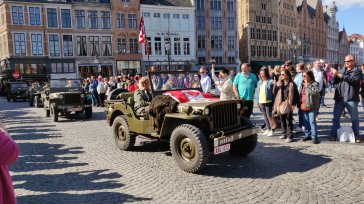 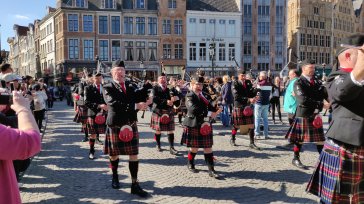 Next, we made our way to the Church of Our Lady, which houses Michaelangelo’s Madonna and Child sculpture-his only sculpture to leave Italy.  We weren’t able to see the sculpture on this day, but we have plans to go back for another event so we will hopefully see it then.

We then visited Hospital Sint Jan, an 800 year-old hospital where monks and nuns took care of the sick, poor and travelers.  We were able to see the main area, the chapel, the attic, and the pharmacy.  The buildings house a museum with medical and pharmaceutical instruments, paintings and other relics of the past.

While heavily invaded by tourists, the city was still very lovely as we wandered around.

To end our trip to Bruges, we left the busy city squares and other tourist areas and headed to an older district.  Aside from the modern cars, signs and parking meters, you could almost picture how it would have looked hundreds of years ago.

All in all, though it was rather touristy, the city was very charming and had many interesting historical and cultural items.

And finally, on our way home, we saw these “mowers” working hard on the side of the road (they were there in the morning too, so it was an all day job)! 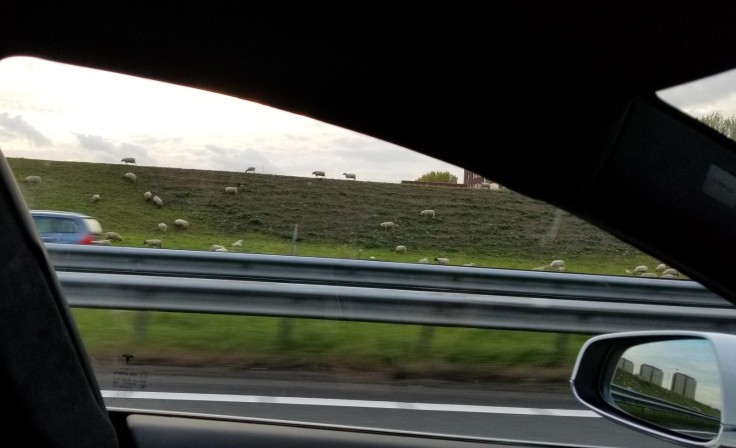